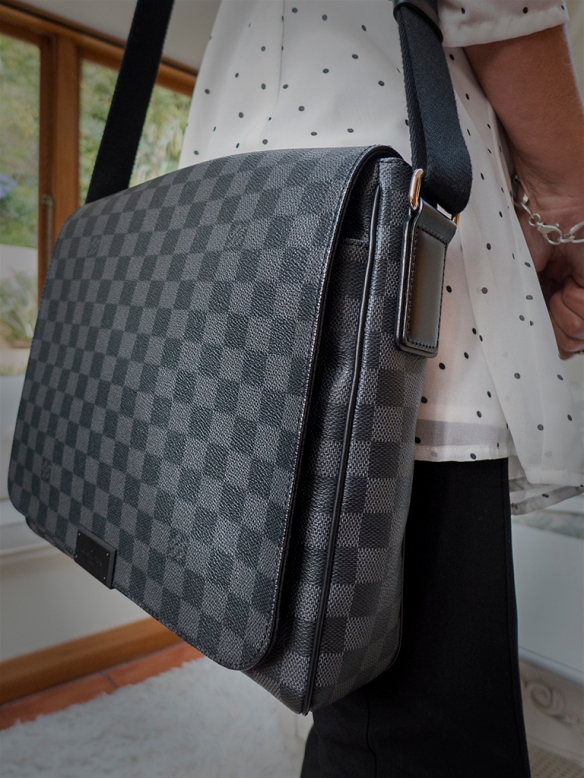 One thing Jean was set on buying, even before leaving home, was some form of sleeve or holder for her MacBook Air. She was waiting until we reached Rome so she could visit Via dei Condotti and the Louis Vuitton shop.

We headed into Louis Vuitton’s three storey shop and were greeted warmly (well Jean was as she had one of the shops fine products over her shoulder) and asked what we were looking for. Yes, of course they have laptop sleeves and bags. Yes we’d be delighted to follow the staff member to look at some options.

The shelves are full of product all perfectly displayed. The staff (who seem to out number customers by three to one) are immaculately groomed and dressed, and the store is spotless with none of the usual retail clutter you see elsewhere.

None of the bags on the shelves are used as samples. If you are interested in a bag, a sample is available from drawers below the shelves, each bag in a special holder to protect it. The staff also wear gloves to handle the merchandise.

Of course if you purchase an item, it arrives already wrapped from somewhere else in the store.

Our modest “laptop sleeve” rapidly turned into a messenger bag. But which size – there were three –  and which pattern – modern or traditional?  The price started to climb.

In the end a selection was made, aided somewhat by a glass of champagne, and was charged to Jean’s account. Yes, scaringly, ever since she bought her first bag 6 years ago, Jean has an account.

God help us all.

Friday is shopping day.  The day we head into Positano with the single-minded purpose of refilling the cupboards for another week. Although the village is only a 10 minute walk, on Friday we take the car. The thought of walking … Continue reading →

The next day the pretty girl and her handsome husband set off early to visit the shop with the magically beautiful dress.  Once again the wicked owner was not there and the shop door was locked.  The girl’s heart was filled with sadness.  “Alas, will I never get to wear the dress?” she said.  As she turned to walk away she noticed a small note taped to the door.  It was a phone number.  At last a way to contact the wicked shop owner.

The pretty girl reached for her trusty iPhone and called the number.  It rang and rang and rang.  Just as the girl was about to hang up, the phone was answered. Oh happiness, the pretty girl listened to the shop owner and the reason for the closed shop was explained.

The owner had another shop in the little village of Positano.  It was nearby and the pretty girl could find the magically beautiful dress there.  Oh joy.  At last the dress was within her reach.  It was meant to be.

But this is not the end of our tale, because nothing in the magical kingdom of Italia is ever that simple.

As she walked to the new shop the pretty girl passed another dress shop and in the window saw another dress.  It was a dress of green.  It was long and cosy. The pretty girl thought it would keep her warm on the long winter evenings that were fast approaching, something the magically beautiful dress would not do. She tried on the dress of green.  The fit was perfect.  Everyone in the shop agreed the fit was perfect and that the pretty girl looked even prettier in the new dress.

The pretty girl was torn.  What of the magically beautiful dress?  Was it not meant to be?  Was it more beautiful and magical than the dress of green?

She decided to do what she always did when this happened – have a glass of wine and a fag and think about it.

Once upon a time there was a pretty girl and a dress. The dress was magically beautiful and hung in a shop window in the little village of Positano. The girl who was visiting Positano in July saw the dress and tried it on. It fitted perfectly. The girl’s sister said she looked beautiful in the dress. It was perfect. The girl said she must have it.

But the girl hesitated.  Buying the dress would mean the girl and her handsome husband would have no money for food or drink for a week. The girl proclaimed “I will come and buy the dress before we leave.  If it is still in the shop it is meant to be”.

Her husband was most pleased as he would not have to go hungry and would have a plentiful supply of ale to quench his thirst.

For the next two days the girl thought about the dress. She longed to wear it again. She vowed to make it hers.

Finally the girl’s time in Positano was ending. Still the shop remained closed. The girl’s sister reminded her “if you return to Positano and the dress is still there, it was meant to be.”

The girl left Positano with a heavy heart and no dress. Over the next months she had many adventures in the land of Italy but always in the back of her mind was the magically beautiful dress.

In November the girl and her husband returned to the little village of Positano. The girl resolved “if the magically beautiful dress is still there, I will purchase it”. Secretly she thought that a dress as magically beautiful as this one would have found an owner long before her return.

On her first day in Positano the girl rushed to the shop. She chose a time when the shop must be open hoping against hope that the dress was waiting for her.

As she approached the shop, through the window, she could see the dress. Still magically beautiful and still waiting for her. It was meant to be. She broke into a run, reaching for her purse filled with gold coins.

But alas, as she got closer to the shop the girl could see that the lights were off and the door locked. The shop was closed. She wept.

When we headed to Europe in April, we didn’t really expect to be here when the weather started to cool down.  As a result, winter clothes weren’t something we brought with us.

But in the last week, althought the days are still sunny and warm, the temperatures at night have started dropping.  It was clearly time to go shopping for something warmer to wear than shorts and a t-shirt.

The good news is that Italy is a great place to shop for clothes.  So stocking up wasn’t difficult.

For those interested, our new winter wardrobe consists of:

11) Grey and blue round neck jumpers

Having looked at the photo of the clothes Jean’s comment was “where’s the colour”? So that’s something we still need to add as well as some gloves and hats.  After that, bring on winter.