Having got the dogs here and then having had them treated for various things that might affect them in the UK and Italy, Poppie’s body finally said  – enough.

It was the most innocuous treatment – essentially an English version of Frontline – that proved the last straw and saw her transform from a happy little dog to a very agitated, unhappy and unwell dog in the space of 2 hours.

For the last 5 days she has only wanted to sit on someone’s lap or hide herself among the pillows on the bed.  The world has held no interest for her and she just wanted everyone to go away and let her be.

After 3 trips to vet and a total bill of £250, we were none the wiser but were armed with skin washes, antihistamines and antibiotics, all the things that might help.

But in the end it was time that did the trick.  But it’s fair to say we will be looking for an alternative treatment for fleas and other crawlies for Poppie in the future.

April 23 is St Georges Day. A chance for the English to celebrate their patron saint – and their sheer englishness.

The team off to the St Georges Day Ball - the Puppy stayed home.

We were lucky enough to be invited to the local St Georges Day Ball which was held in Bedford, about 20 minutes from where we are staying.

It was a black tie affair and included a reading from Shakespeare’s Henry V, the parading of the roast beef by the chef and members of the local Queens Guards regiment, and the singing of Land of Hope and Glory, Jerusalem (an odd choice of song to celebrate England I thought), Rule Britannia and, of course, God save the Queen.

And when I say singing, I mean at the top of our voices and accompanied by frantic flag waving – St George’s crosses of course.  Anyone who walked in would have thought we had all been drinking – which we had.

The Parading of the Roast Beef - of course. On our feet for Rule Britannia

The serious side of the evening was fundraising for a local mental health charity, and the fun side was enjoying a level of patriotism that we Kiwis don’t really understand, mixed with some great Roast Beef and Yorkshire pudding and some fine company.

A very special thanks to our friend Andre who managed to squeeze us onto the guest list.

On our feet for Rule Britannia

The fields around Aspley Guise are turning bright yellow.  The crop is Rapeseed (Canola Oil) and the flowers are an intense, intense yellow.  In a week or two it will be harvested and the land will again be shades of green and brown but right now it looks stunning.

The English countryside is glowing.

About ten minutes from where we are staying is the Duke of Bedford’s estate at Woburn.  As with many of the stately homes of England, the abbey and surrounding grounds are open to the public and operate as tourism businesses. … Continue reading →

We recently spent the day in the university town of Cambridge.  It was almost enough to make me want to go back to school.  Almost.

For the last week have been staying in our friends house in the village of Aspley Guise about 15 minutes outside Milton Keynes.

When we arrived, our friends Gill and Andre and their children Josh (11) and Jordan (5) were in New York on holiday but thanks to lifesaving instructions left by Gill we moved in and found our way around the house, the village and the local area.

In fact we were so well settled that when Gill and Andre and family returned on Friday, they were greeted by the dogs as if they were visitors in their own home with much barking, jumping and running around.  The dogs were delighted to see our friends, however the children were not so sure about seeing the dogs.  It wasn’t helped by Daisy corralling the kids in the corner of the kitchen.

Happily that phase is over and Jordan and Poppie are, apparently, now best friends.  To a casual observer that seems to involve Jordan sitting next to Poppie stroking her with Poppie simply enjoying the added attention.  The way things are going I’m quite expecting to see Poppie dressed up in a frock, wearing lipstick and with high heels on some time in the not to distant future.

The English spring continues to develop with leaves returning to the trees in the garden and a constant supply of spring flowers popping up in the garden unannounced.  The weather, which turned cold last week, is back on track for a warm summer and it’s shorts and T shirts weather at present.

With that, it seems like time to head off to the local farmers market for a look see.

“You’re taking your dog?  No, really?” was pretty much the standard reaction we got when we told people the whole family was travelling to Italy.  For these of you who don’t know, our family consists of Daisy and Poppie – Bichon Frise dogs which can best be described as small, white, fluffy with attitude.

Thanks to the team at VenturePet in New Zealand, Jean’s diligent research on moving dogs around the world and around $5,000 they made the trip to the UK.

After we arrived at Heathrow, collected our bags and collected our new Peugeot lease car we drove to the aptly named “Animal Reception Centre” to collect the girls.

This was where all the paperwork, vaccinations and research came together.  The wait seemed eternal as other people received their dogs or cats but there was no sign of our girls.  There was nothing we could do, we just waited.

The process was complicated by a computer failure at the centre, but eventually we signed everything we needed to and two noisy happy dogs emerged from the bowels of the building.

In true Bichon style we heard them before we saw them but when they arrived the reception centre lobby turned into a sea of swirling white Bichons much to our relief and the amusement of everyone else. 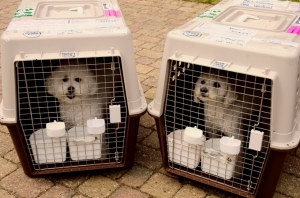 A week later they are displaying no ill effects from the trip apart from a little jet-lag.  In fact as I write this, they are both spread eagled on the bed beside me snoring happily.

Jean was so organised before we left that we had an appointment with a vet in our local village.  They have now had check ups and we are going through the process of ensuring they are safe from all the bugs that we don’t have in New Zealand, but they do have here – and in Italy.

They also have been issued with genuine EU Pet Passports – so roll on Italy.

© Graeme Mowday and Toscanakiwi, 2011. Unauthorized use and/or duplication of this material without express and written permission from this blog’s author and/or owner is strictly prohibited. Excerpts and links may be used, provided that full and clear credit is given to Graeme Mowday and Toscanakiwi with appropriate and specific direction to the original content.
toscanakiwi
%d bloggers like this: