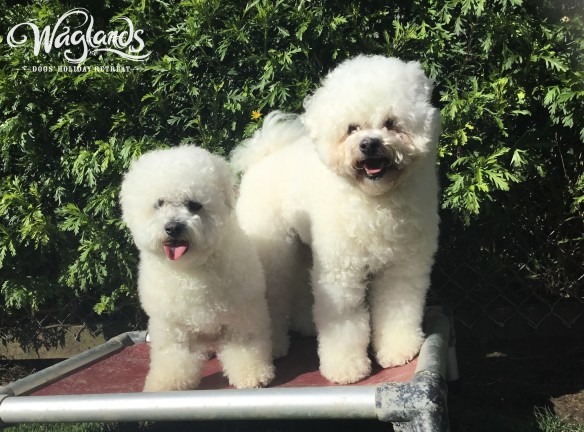 Our girls have been in a kennel for over two weeks. For both of them this is a whole new experience. We were a bit concerned how they would react and whether they would settle in.

We have been missing them so we asked the team at Waglands Dogs’ Holiday Retreat – seriously that is the name – to send us some photos of the girls. They arrived today and it seems we had nothing to worry about.

We suspect they’ve just had a bath as they look a bit too clean and fluffy for over two weeks on holiday in the country.

For the uninitiated, it’s Ellie on the left and Bella on the right.

Staring at the sky the other day (we have nothing much else to do folks) Jean noticed one cloud that looked familiar. Either that or we are missing the dogs more than we realise.

While we are away in Italy our girls are being looked after by our dear friend Vicki who has moved in for 4 weeks. We receive regular updates and photos showing how much they are missing us. Or possibly not missing us …

Missing us at bed time? You decide

I was going through some old video footage and found this clip of Bella as a puppy. It’s funny how time erases the bad and only the good is remembered.

Tonight the temperature dropped to around 5 degrees celsius. It was calm but cold – bone chilling cold.

This did nothing, however, to change Bella’s habit of sitting outside in the back yard, on one of the plinths beside the steps, surveying her domain, keeping an eye on the neighbours and keeping an eye on us in the kitchen.

It doesn’t matter what the weather is, how cold it gets or the time of day, when the mood takes her Bella sits, thinks and watches.

Poppie was off her food – which was unusual. So we went to the vet for a check up only to discover she had a low red blood cell count. The norm for a dog is a PCV (packed cell volume) of between 35 and 50. Poppie was 27 and over the following week that continued to drop to around 20.

This was serious – anything below 15 is seen as critical and anything under 12 requires a blood transfusion to keep her alive.

Importantly we needed to find out why her red cell count was dropping. There were a multitude of possibilities so Poppie was admitted to the Massey Vet Hospital in Palmerston North and a barrage of tests was undertaken – all against the background of a continually dropping blood count.

She had a bone marrow biopsy, among another things, which is a particularly invasive procedure. No one wanted to do it, but it turned out to be the only way to confirm what was going on in her little body.

On a Thursday morning we got a call – her blood count was 11 and her body was starting to shut down. An immediate blood transfusion was needed. Her specialist (Dr Matt) didn’t think she had enough blood left to take a sample for blood matching so there was a risk any new blood could be rejected and she would slip into shock. No one had a good diagnosis if this happened.

At 11am the transfusion began – 4 hours later she was finished – thankfully in one piece and with a blood count close to 40. Of course a transfusion is only a temporary measure as the transfused cells will die quickly. We would be in the same situation in a matter of days if we couldn’t find the reason her red blood cells were dying but, critically, we had bought Poppie some time.

Ever since the first visit to our vet the suspicion was that Poppie had IMHA (Immune-mediated Hemolytic Anaemia) – where her own white blood cells become over zealous and not only attack cells that shouldn’t be in her body (the function of white cells in all of us) but also attack her own red cells, killing them. She had been put on a treatment regime of steroids and immune suppressant drugs  when she was admitted to Massey that hopefully would suppress her white cells and allow her red cells to regenerate. But clearly this cocktail of drugs hadn’t worked – or hadn’t had enough time to work – hence the need for the transfusion.

Dr Matt explained that this treatment would take time and in 25% of dogs it simply would not work. We were hopeful Poppie was in the other 75%. A few days after the transfusion she was home (because, as Matt explained, a place full of sick animals is a bad place for a dog with little or no immune system) and we became prime carers for the girl.

Since that time we have seen Poppie’s blood count hover around the 38 – 40 mark. Her body has started to regenerate red blood cells and we have been able to reduce her steroid medication slightly.

We have regular blood count checks – probably more than are needed – as every time Poppie looks like she’s feeling under the weather she’s off for another check.

Time will show how much we can reduce her medication as the side effects of high doses of steroids aren’t great. Hopefully we can wean her off most of the pills as her body improves it’s ability to produce red blood cells and her immune system starts to settle down.

Update: two steps forward and one step back – the reduction in steroid dose mentioned above has been reversed as her body wasn’t ready and the white cells were making their presence felt again. Dr Matt says we’ll try to reduce the dose again in a months time.

A few days ago Poppie was told that she (with Jean in tow) will be spending next weekend in Hamilton with her Auntie Vicki and Vicki’s dogs Macey and Georgie.

Poppie loves Vicki and her reaction was priceless.

© Graeme Mowday and Toscanakiwi, 2011. Unauthorized use and/or duplication of this material without express and written permission from this blog’s author and/or owner is strictly prohibited. Excerpts and links may be used, provided that full and clear credit is given to Graeme Mowday and Toscanakiwi with appropriate and specific direction to the original content.
toscanakiwi
%d bloggers like this: