It’s a well known saying that the best camera you own is the one you have with you. More often than not these days, that will be the one in your phone.

Over the years cameras in phones have got better and better to the point where they can now do almost everything that conventional cameras can.

But there are a few exceptions. One of these is the ability to manage depth of field – to have some parts of a shot in focus and some not.

On our trip to Italy in 2014 I spent a day sightseeing around Syracuse and Ortygia with only my iPhone – a 4S. I’d actually forgotten to take my DSLR camera so the challenge was to get the best shots possible just using the phone. Overall the results were pretty good, but in a bunch of shots everything was in focus (the norm for phone cameras and not a bad thing) but the shots would have looked better if the foreground and background weren’t.

Retouching to the rescue. I used Photoshop to do the work but there are a bunch of other apps that can be used. In fact anything that can reproduce a “tilt shift” effect is ideal.

Tilt shift is a technique which makes a scene look like a miniature or model (an example is below). Not so many years ago this look could only be achieved using a special, and extremely expensive, camera lens. But with the advent of digital retouching it became much easier. It is also great for adding in depth of field to a shot where none exists.

I’ve included a couple of examples in the gallery.

Peaches and Pears after tilt shifting

Positano Beach in Autumn with a tilt/shift effect added

So let me be clear, this post is a bit obscure – unless you were there. The photo is of a swimming pool in Sicily. We stayed in a lovely villa in Syracuse – that included this pool – with our friends Gill and Andre and the family in 2014. We spent a great week in and around the pool.

It was the centre of daily activity, but after the sun had dropped below the horizon and everyone headed off to dinner it took on that wonderful Italian evening glow. A mix of pale sky blues, harsh sunset yellows and every shade of pink imaginable. All contrasting with the bright blue of the somewhat ordered loungers.

Take a bow Syracuse, you earned it.

Yesterday, our week in Sicily came to and end and we returned to Positano. Our journey back was a truly Italian experience. We drove from the villa to Catania airport and arrived with over 2 hours to check in, go through security and board our flight – loads of time we thought.

Jean and I have played this game before so she joined the “bag drop” queue (for that read mass of people all crowding around the one poor Alitalia staff member at the bag drop counter) while I joined the “print your boarding pass” queue.

After about 40 minutes Jean had moved 3 feet and I had reached the check in terminal. With about 200 people watching, waiting and providing helpful (and loud) advice in Italian (no pressure) I went through the process of printing the passes.

Just as I rejoined Jean an Alitalia staff member came through the crowd saying that those travelling to Napoli should move to another, newly opened, check-in counter. Salvation we thought, as we joined a relatively short queue to check in.

But then another Italian tradition kicked in – everyone in the queue had a problem with something – the lady travelling alone with 4 check in bags and no intention of paying for excess baggage. The couple travelling with a dog, but no booking for the dog.

In 30 minutes 3 people (plus 4 bags and 1 dog) had checked in. We now had less than an hour to our flight departure.

A lovely Italian gentleman who was seeing his son off looked at us and shrugged his shoulders. He said that this always happens but somehow it all comes together in the end – he called it “Italian creativity”.

At that point the baggage belt stopped working. Apparently the baggage handling team was overwhelmed and needed some time to recover.

By this time we had reached the check-in desk and had our bags tagged but they were sitting on the floor in front of the counter – together with a growing number of bags as the luggage started to spread across the terminal floor. The baggage conveyor belts were full and not moving and we were told not to leave our bags unattended.

We now had less than 30 minutes to get through security and make the flight. This made us nervous because as we’d passed the entrance to security about an hour and a half earlier and it had queues longer than the check-in desks. But we had no choice. We were stuck watching our bags.

At this point a helpful check in lady pushed a few bags around on the carousel and found a spot for our luggage. So we were off to join the queue at security.

But now the delay worked for us. Because check-in had effectively stopped, security was deserted. It took 5 minutes to go through and reach our gate, just as boarding was commencing.

At this stage we gave our bags about a 10% chance of making the flight – but as we sat on the plane we could see them being loaded – along with all the others for the flight. We left on time and actually arrived 5 mins early into Napoli – with all our luggage intact.

After the early start and drama of the flight, we were exhausted so both managed to fall asleep in the back of the car that collected us from the airport for the drive to Positano.

But things were looking up – we arrived at the hotel to a warm welcome, a room upgrade to a suite, and two glasses of chilled prosecco waiting for us.

On Saturday we visited the historic hilltop village of Noto located about 45 minutes drive south west of Syracuse. It is  a UNESCO world heritage site famous for its fine early 18th century buildings, considered among the main masterpieces in the Sicilian … Continue reading →

The view beyond our pool and out over the olive grove was enhanced on Thursday night by a spectacular sunset.

Ortygia is a small island separated from Syracuse by a narrow canal. It was the site of the original ancient Greek settlement which later became the bustling trading and fishing port of Syracuse. In fact the population of Syracuse around the … Continue reading →

We arrived back at Sant’ Agostino after dinner one night earlier this week and discovered one of the guests had almost managed to park their Fiat Punto in the carpark. Now I’m no expert but given the height of the curb the … Continue reading →

Last Monday we departed Positano early in the morning for Naples airport and then on to Catania in Sicily. After a 45 minute flight, a 40 minute wait for our bags and an hour long wait at the Hertz office to … Continue reading → 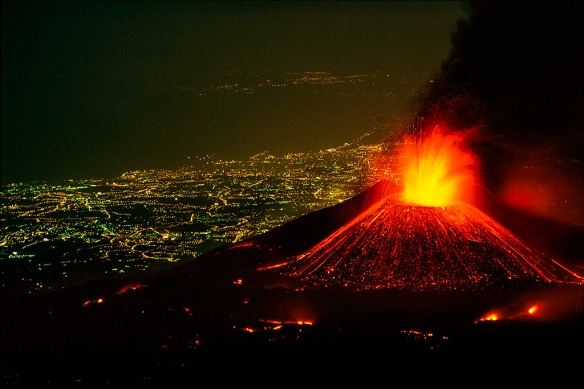 What do you know about Sicily? Probably more than we do.

The furthest south we have ever been in Italy is the Amalfi Coast just south of Naples. But not this trip because this trip we are spending a week in Sicily – the island known for Mt Etna and the Cosa Nostra.

We fly into Catania which lies in the shadow of Mt Etna (which is still classified as an active volcano). From there we drive south for 2 hours to Noto where a villa and our friends Gill, Andre, Josh and Jordan are waiting.

We have a week to discover our corner of Sicily. What should we do? Where should we go? Make us an offer we can’t refuse.