Today the rain has stopped so it’s clean up day at our place – which will consist of sweeping up some leaves and branches, cleaning some windows and cutting up our fallen olive tree.

But we got off lightly following the storm last week.

Parts of Wellington’s south coast – where I was taking photographs just a few days ago (click here and here to see the photos) – have been hit hard and the clean up work will take weeks. I’ve included some photos that show what south coast locals have to deal with. As one wise local said “if the sea wants something, it will simply take it”. There’s not much more to say really.

Wellingtonians are hardened to winter wind. Wind that anywhere else would be called a gale is referred to as a strong breeze in Wellington. Any wind that doesn’t physically blow you over is a mere zephyr. It takes something exceptional to get the attention of Wellingtonians.

Last night the weather had our full attention. A storm that originated at the South Pole has been sweeping up the country over the last 24 hours. For everywhere other than Wellington it meant snow but for us it meant rain -with accompanying gale force winds up to 140km/h.

At one point 25,000 people were without power partly due to trees being blown over and taking power lines with them. House rooves started to lift and outdoor signage took to the air.

Our place took to shuddering as each gust of wind arrived and the curtains bowed out from the windows as the wind found new ways to sneak into the house. The garden took on the  look of a bomb site as leaves and branches and rubbish bins and patio chairs blew around settling far from where we last left them. Both Poppie and Bella simply refused to go outside and everyone decided the best place to be was in bed.

This morning the full extent of the damage became apparent. One of the olive trees we planted about 8 years ago had succumbed to the wind and lay parallel to the ground. We had talked about removing this tree over summer but couldn’t bring ourselves to do the deed – to wield the saw. It’s ironic that mother nature has done it for us.

Our garden after the storm

Our garden in summer as a contrast

A sad farewell to one of our olive trees

Yesterday the first cold southerly blast of winter arrived. The temperature dropped from around 15 degrees to 7 degrees. Snow fell in the Southern Alps and on the volcanic plateau in the North Island closing roads and causing general chaos.

And snow fell on the hills around Wellington. When we woke this morning and looked out the window, the view across the harbour included an early season dusting of snow.

Today is a beautiful sunny day but the temperature is hovering under 10 degrees in the shade. Thankfully the wind has gone and things will continue to improve towards the weekend – when winter officially starts. 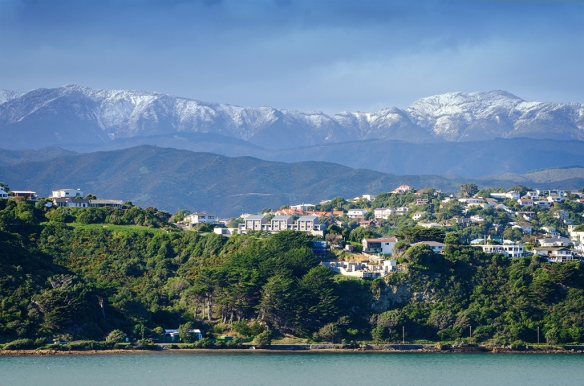 Snow across the harbour

One of the things I enjoy about Wellington is the amount of public art around the city. I’ve already blogged about the writers walk along the waterfront – the snippets of kiwi writers works carved in stone scattered here and there for people to discover. But there is so much more.

On the way to Wellington airport are a series of wind inspired works, each one making a unique statement about Wellington’s defining climatic condition and each animated by the wind in a unique way.

Here is the first in a series of shots of the various Meridian Wind Sculptures stretching between Evans Bay and the airport. Zephyrometer is a work by Phil Price erected in 2003. It is a giant “windometer” which often reaches close to horizontal in strong southerly winds. Something every Wellingtonian will have seen over the last 10 years.

The second sculpture is Andrew Drummond’s Tower of Light. The stronger the wind blows the faster the rotor on top revolves and the more neon tubes light up powered by a generator in the rotor. If you are driving into the city from the airport and see all the rings illuminated be prepared for a rough time.

Zephyrometer on a calm day

With winds whistling through Cook Strait at up to 140km/h today our place reminded everyone why it’s called Windy Wellington.

The normally peaceful view of small boats moored in the shelter of Evans Bay looked a little different today.

Not our usual spring weather

Having written about various parts of the world over the last year it’s time to write about our place, Wellington, New Zealand. It’s where I was born and where I have lived since. After every overseas trip or holiday there … Continue reading →