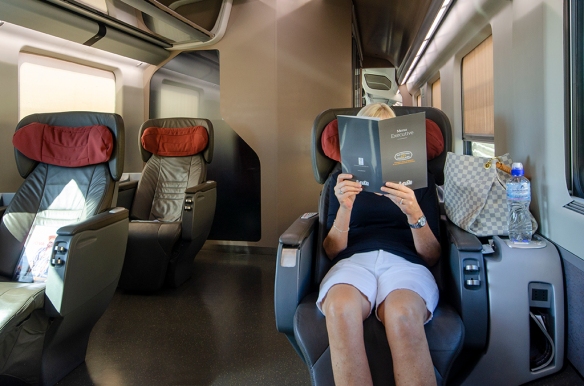 Getting around Italy by high speed train is easy and relaxing. We have regularly used it between Rome, Florence and Naples in the past and this trip is no exception.

The one thing we haven’t done before is try out Trenitalia’s premium class. This is half a carriage of luxury seating – 8 seats in all – right at the front of the train. It costs a bit more but comes with a meal service, a cabin crew member to look after you and your luggage and more legroom than you could want. There is even a conference room in the carriage if a quick meeting is needed en route.

On this leg of our journey from Rome to Florence we treated ourselves and booked seats 2A and 2B. 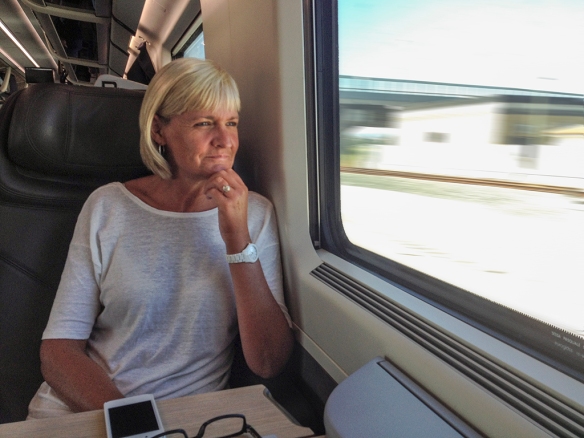 Yesterday we left Positano and travelled north by high speed train to Firenze and then drove south to our base for the next two days – Radda in Chianti.

After the fun and games of air travel, train travel is so easy and relaxing it’s ridiculous. The most stressful part of the trip was keeping an eye on our bags at Napoli Station – a place renown for pick pockets and thieves.

In all it took 2 hours and 50 minutes to complete the train trip that would have required between 5 and 6 hours to drive.

We collected a rental car at Firenze, negotiated the city’s one way system, and 50 minutes later checked in at Relais Vignale in Radda which is in the heart of Chianti.

We have dinner planned with friends who live in Chianti and a trip to Siena for a spot of shopping before heading on to Roma – because, as they say, that’s where all roads lead. 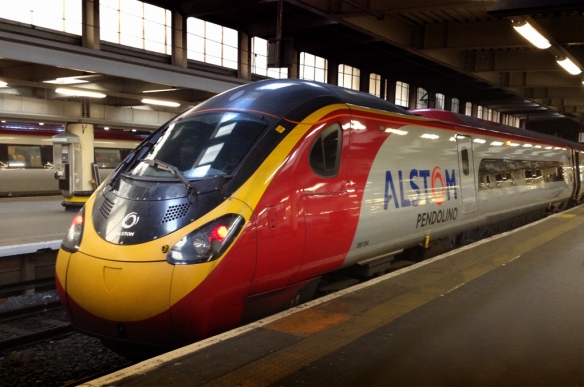 On Tuesday we travelled to London to meet with recruitment consultants to gain an incite into the English employment market. We took the fast train from Milton Keynes to London Euston – 30 minutes non-stop.

When we arrived at Milton Keynes Central to catch the train we discovered that services were delayed due to a train breaking down earlier in the morning (half a world away but things don’t change) but even given the delay we still arrived in London with time to spare. Before the trip back to Milton Keynes I snapped a shot of the train – something for the rail boys (and girls) back in New Zealand.

Virgin introduced the Pendlino trains in 2002 and now operates 50 sets. The trains currently have a top speed of 125mph.

It was simple.  Charmaine, Mike and James on a high speed train from Naples to Florence.  Jean and I and the dogs in the mighty Peugeot doing the same trip aiming to arrive before the train so we could help them collect a rental car and then follow us to our place south of Siena.

As with all Top Gear challenges there was a twist.  We left Positano at 11am and drove hell for leather north to Florence – a five and a half hour trip.  They left Naples at 1:50pm and were due to arrive in Florence at 4:50pm.

It was always going to be tight.  But I always thought the mighty Peugeot had the edge.  And so it proved as we blasted north along Italy’s version of SH1.

We were just south of Rome when the train was due to leave Naples which gave us a lead of 1 hour.  An hour that would be quickly eroded as the train hit it’s maximum speed of 300km/h on the straights between Naples and Rome.

So we put the hammer down and and spent considerable time close to the 150km/h mark.

But no challenge is that simple.  We got a text from the train travellers that they had run into problems – the train had stopped just 15 minutes out of Naples.  We continued on, extending the gap as quickly as possible.

An update from the train said the delay would be lengthy so we revised our plans.   Mike and Charmaine were picking up a rental car in Florence and were going to follow us south but the rental depot closed at 7pm and with the train delay we were not sure if they would arrive in Florence in time.  We would go to Florence via our cottage in Tuscany, drop off bags and then proceed to Florence with enough room to carry them if required.

Update – the train was moving again and halfway to Rome.  We were on our way to the cottage, it was going to be close.

Update – the train had arrived in Rome.  We were still on our way to the cottage, it was going to be really close.

Update – the train is halfway to Florence.  We had dropped our bags and were on the highway north, we were in trouble.

Update – the train has arrived in Florence.  We were still 30kms short of Florence.  Game over. I could almost hear Clarkson yelling “loser” with the dreaded right-handed “L” to the forehead.

Moral of the story – never race a high speed train.  The trip from Rome to Florence should, according to the train timetable, have taken about 90 minutes.  The train did it is less than 60 minutes – clealry they have a “little slack” in the timetable.

Last dinner at Eden Roc Hotel before the challenge

Mike and Charmaine on the last night at Positano