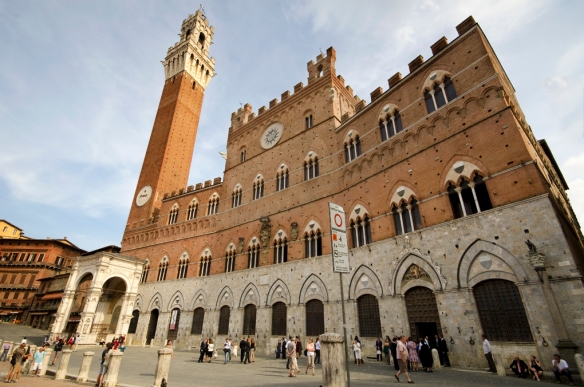 Charlie and Isabel arrived on Saturday afternoon having travelled from north of Florence.  I had suggested they text us when they got close to our place which, in this case, meant texting from the carpark “I think we are here”.  The 3kms of dirt road make you wonder where the hell you are the first time you arrive.

We ambled out with the dogs and found them looking around wondering if this was our place or the home of some local family.  Either way they would have been made to feel welcome.

Dinner that night was at our local Pizza restaurant Le Campannia (other summer visitors will know this restaurant) which does excellent pizzas and provides endless free entertainment watching the antics of the locals.

Next morning was the All Black quarter final game so the entire team headed to the Campo at 9am to watch the game.  Clearly word about our World Cup venue is getting out as there were already two holidaying kiwi couples waiting for the game – and with us that meant the crowd swelled to a record eight people.  Nine counting an elderly Italian gentleman who joined us to support the French. He was a day late but still enjoyed the game.

Ninety minutes later it was “job well done” by the lads.  Well sort of well done as there is still some work to do before meeting Australia – and a chance for a wander around Siena before lunch in the sun at Osteria del Bigelli which, once again, did not disappoint with the food.

Jean made her famous kiwi roast pork with gravy for dinner and we washed it down with a very nice Chianti courtesy of our guests.

Rugby, beer, wine, sightseeing and roast pork with gravy.  A top day and a half.