Saturday morning we made our regular pilgrimage to the Siena to watch the All Blacks play.  As we approached La Birreria, Jean commented “here we go again” referring to the ritual process of getting the television tuned to the right channel. 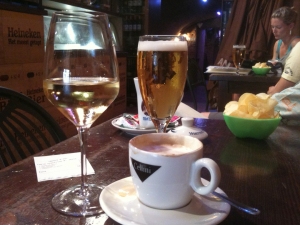 But clearly we are having an influence on the bar.  When we arrived the TV was tuned in and already playing the warm up.  Chairs and tables had been arranged ready for us which meant we got to see the warmup, anthems and haka.  All things we wanted to see but usually missed.

We also had some fellow spectators join us.  A young couple from Hamilton who are in Europe for 5 weeks holiday walked in as we were getting settled.  They said they had driven an hour and 20 minutes from just south of Florence to find this particular bar in Siena. A blog they had read, written by Kiwis living in Tuscany, had mentioned it had live television coverage of the Rugby World Cup.  It took a moment for us to realise they were talking about Toscanakiwi.  Clearly our little blog has a wider readership than we thought – by at least 2 people.

So dear readers for the next big game  – the quarter final –  the drinks at La Birreria are on me.  See you all there.