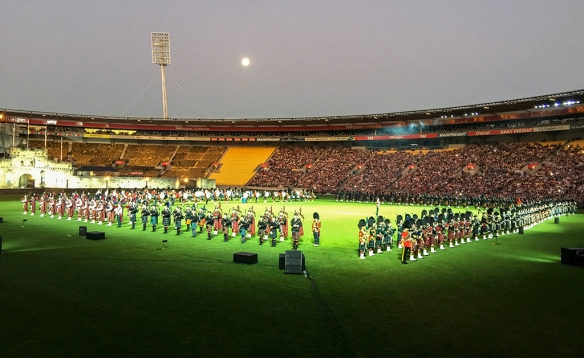 No not that type of tattoo – I’m talking about the Edinburgh Military Tattoo – in Wellington. We attended last weekend’s sold out event at Westpac Stadium and enjoyed a cracking show.

There is nothing like the sound of massed pipes and drums to bring out the Scotsman in everyone. Apart from the pipes and drums, the highlights for me were the Top Secret Basel Drum Corp and His Majesty The King of Norway’s Guards Band and Drill Team. Both were superb.

And let’s not forget our own New Zealand Army Band who brought their unique spin to military band music and marching.

It was a sell out show and, unlike the usual stadium concert crowd, there was overwhelming representation from the silver fox brigade. So much so that I felt like a youngster.

All in all, a great night out.

The crowd is growing

Crowd with moon in the background

3 thoughts on “Time for a tattoo I think”